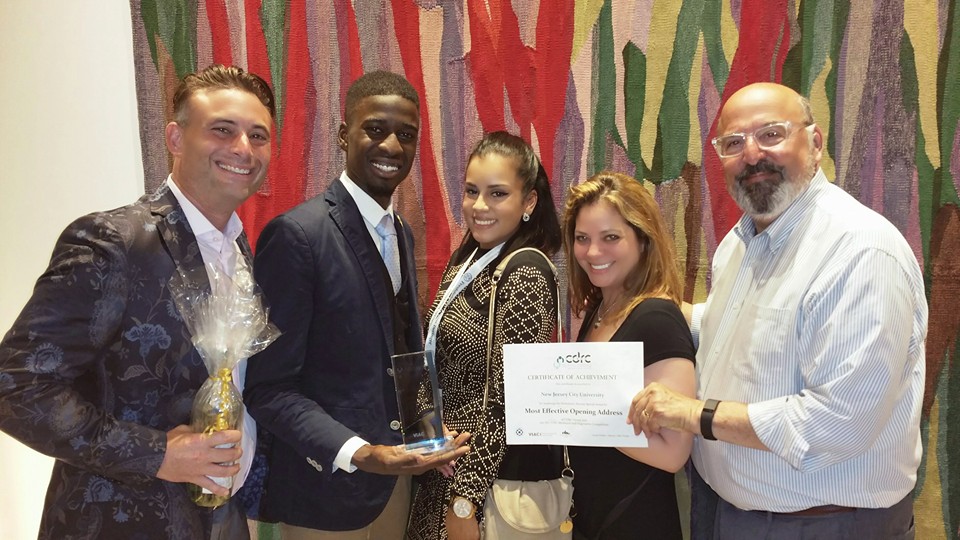 Institute for Dispute Resolution soars in Vienna as the NJCU student team competed against international law students recently and won an Award for Best Opening Statements.

The competition was held at the Vienna Austria CDRC (Consensual Dispute Resolution) Mediation Competition — sponsored by the international bar association).

Leman Kaifa and Paola Andrea were there with their team representing the Institute For Dispute Resolution (IDR); a recently formed organization at the School of Business at New Jersey City University. Also in attendance with the IDR student team were visiting scholar David Weiss, and professors Bob Marguiles, and Karen DeSoto, who also all served as coaches for the students.

In a recent interview Ms. DeSoto said that “We’re so immensely proud of our students. They competed at the highest levels. The entire experience I think has been great for all of us. The Institute has raised the profile of New Jersey City University, provided students to expand their knowledge and worldviews as they travel internationally — meeting and and competing with other students from all over the world.”

Karen DeSoto explained the formation of the Institute: “The idea came about while David Weiss and I were discussing ways to promote international commercial trade and commerce for the state of New Jersey.  And that discussion prompted us to contact the school president. He was very supportive from the start and everything — through a lot of hard work and diligence — fell into place”.

The IDR, in addition to organizing trips for its students, engages in research, academic programming, hosting conferences, symposiums, and lobbying the state and international organizations for better dispute resolution alternatives: According to IFR co-director David Weiss  it “helped develop a piece of legislation (S-602)” through its applied research and publication department. The legislation has bipartisan support; it was sponsored by Senators’ Sandra Cunningham and Tom Kean Jr. to address the lack of an enforcement mechanism for arbitration under the ‘New York Convention’.  It is a corollary bill that would work in the framework of our current arbitration statute.”

5 thoughts on “Institute for Dispute Resolution Soars in Vienna”